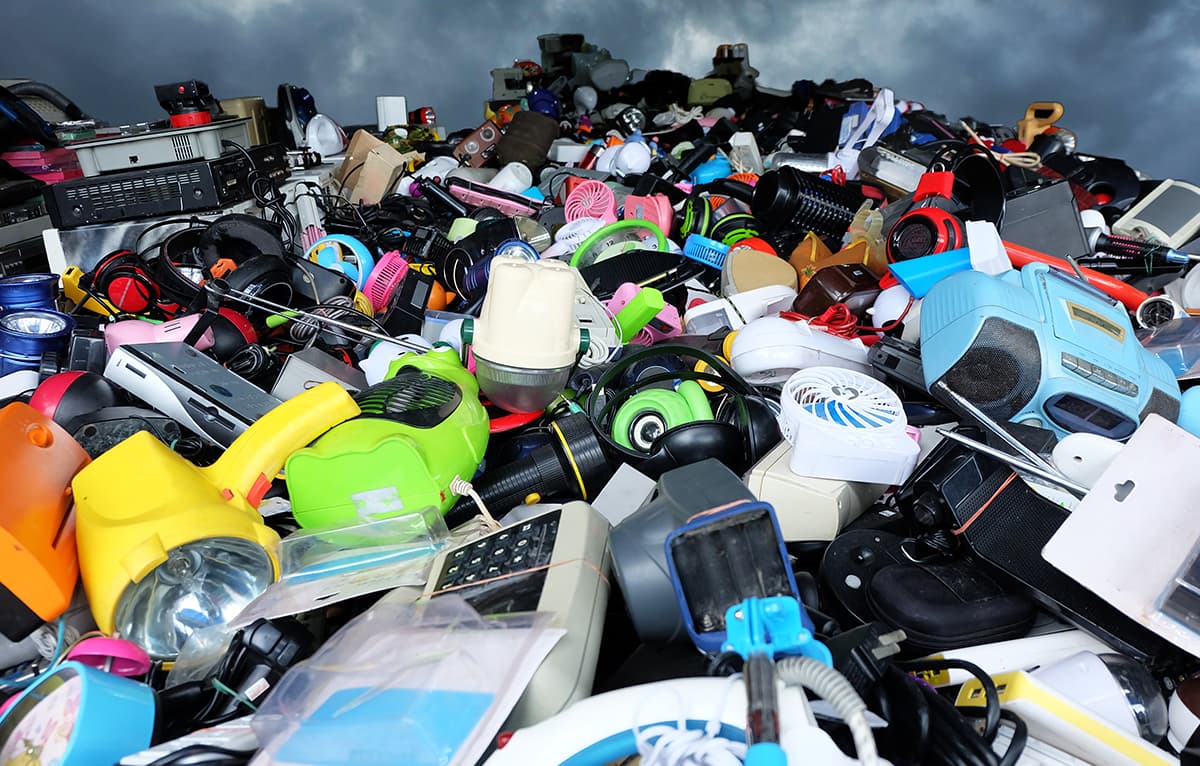 E-waste is the short term used to describe all waste that is discarded from electronic devices. With the rapid expansion of technology, global production of electronic waste has escalated immensely in the past few decades. Because electronic waste contains harmful chemicals such as, mercury, lead, cadmium, sulfur and other chemicals, electronic waste constitutes a serious environmental issue, several countries worldwide have committed to tackle this problem and are implementing policies that would reduce the environmental impact of e-waste.

Electronic waste is the combination of all residues created from electronic devices. These devices can be lamps, computers, household appliances, cell-phones, air conditioners, and medical devices. Several definitions have been used and revised in recent Directives in attempt to provide a classification of e-waste. The Waste Electrical and Electronic Equipment Directive categorizes electronic waste as:

Although definitions vary, all directives agree that electronic devices contain harmful chemicals and components that are not naturally degraded in the environment, creating a serious environmental impact with a high carbon footprint. Overall, e-waste is composed of large amounts of plastic, various metals and toxic chemicals. Thus, electronic waste is not biodegradable.

How much electronic waste is produced worldwide?

With technological advances over recent years, most of our daily used components have become electronic with NFC sensors, Bluetooth, GPS and other electronic technology embedded within them. From children’s toys to notebooks, most of our personal possessions are now interconnected and digitalized. The increase in technological devices has pushed e-waste production to reach over 50 million tons per year. The global distribution of e-waste varies among countries and has been used as an indicator of development with developed nations producing more waste per capita then under developed countries. 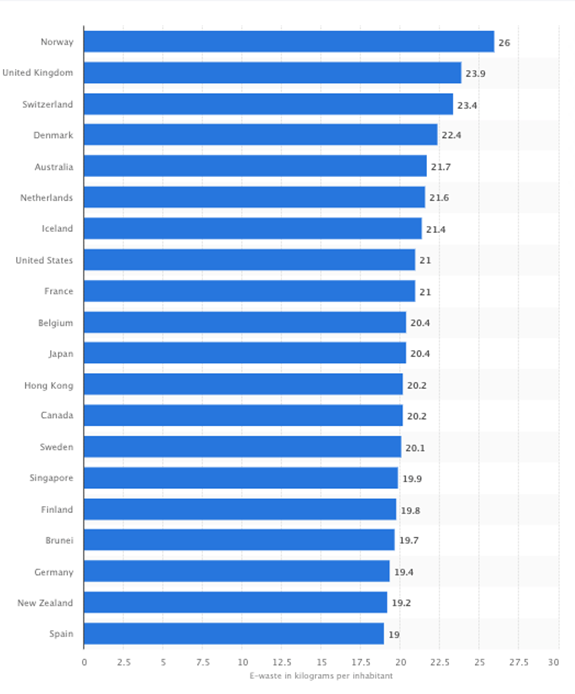 The largest concentration of e-waste production is found in European nations with Norway reaching 26 kgs of electronic waste produced per capita yearly. Estimates indicate that this number might nearly double by 2030 with a total of 70.4 million tons of waste being produced annually. The alarming growth of this number has pushed nations to increase their policies and improve their e-waste disposal protocols around the globe. Currently, only 20% of e-waste is recycled worldwide and directives and measures are being implemented to increase this percentage and avoid further contamination of the environment.

What is the environmental impact of electronic waste?

Electronic waste needs to be properly dismantled in order to enable effective recycling and during this process different environmental impacts can be generated for each portion of the waste. In general, e-waste can be dismantled into 5 general component parts with specific potential environment impact as seen in the Table:

More disturbingly, until recently, policies worldwide did not require local recycling of e-waste and the exportation of this material to poorer nations has been common practice for decades. Although exportation was previously considered appropriate, most of the recipient countries lacked the technology and safety measures to allow for proper recycling of these products, and thereby transferring the environmental risk to these areas.

Local population, water supplies and natural habitats around Africa and Asia have progressively showed signs of the environmental damage caused by the various forms of toxins and contaminants released by these unregulated recycling units. Additionally, reports on child labour are frequently received from treatment areas with families living below the poverty line and submitting themselves to a highly toxic environment to extract precious metals from these landfills.

On the other hand, continuous increase in the demand for electronic devices has also become a concern in recent years as natural resources are becoming scarcer. For example, gold which is commonly used in circuit boards, is one of the hardest materials to mine and with its growing scarcity in recent years, incidents of environmental pollution occurring during gold mining have increased drastically.

Currently, it is estimated that for every 0.33 ounce of gold extracted, a mass of nearly 20 tons of toxic waste is produced. At this rate, keeping up with the demand for new electronic devices becomes an unsustainable process.

How much electronic waste is recycled?

Rates of e-waste recycled worldwide varies among countries and have slowly increased in recent years due to changes in legislation. Currently, less than 40 percent of e-waste produced in the EU is recycled with Croatia being the top recycling country in 2016. These numbers will hopefully see significant change in the coming years as new regulations are being imposed. In February 2021, the New Circular Economy Action Plan imposed new targets for European Nations seeking to promote a carbon-neutral, environmentally sustainable, toxic-free and fully circular economy by 2050 with significant changes in use and consumption of electronic devices by 2030.

Unfortunately, despite increased rates in e-waste collection, there is still a significant challenge in proper waste recycling in Europe as nations continue to export for illegal processing and are expected to miss the current targets, with exception of Bulgaria and Croatia. Hence, there is a pressing need for implementation and installation of new recycling plants throughout Europe to help provide with proper recycling techniques and circular economy approaches for the e-waste that is being collected in the European Continent.

E-waste is increasingly becoming a challenge and an opportunity in the region. Policymakers, industry leaders and consumers are paying more attention to the current low-rates of recycling in Asia. They are looking for safe and sustainable processing technologies to ensure high resource recovery.

In Asia, there are many unsafe and unethical recycling techniques and mining practices that have a significant negative impact on society. Smart Creative has developed an ultra-safe, clean, ethical and environmental solution which recovers 99 per cent of all materials. This is achieved by using non-hazardous chemicals which gives higher yield and returns compared to traditional technologies.

The method can treat waste in less than 30 minutes while recovering higher quantities of both precious metals like gold and palladium and other metals like tin and aluminum.

Furthermore, the company’s recovery system for silver and lead — from discarded e-waste such as printed circuit boards and cathode-ray tubes — provide a local, sustainable alternative to treating e-waste that eliminates the need and high cost of exporting e-waste.

The technology lowers energy consumption by up to 80 percent compared to traditional methods like smelting. It enables the increased conservation of natural resources by extracting significantly higher levels of materials without risk to humans and the planet. For corporations or governments who are keen to see how Blue Planet can help offer e-waste solution, please contact us.