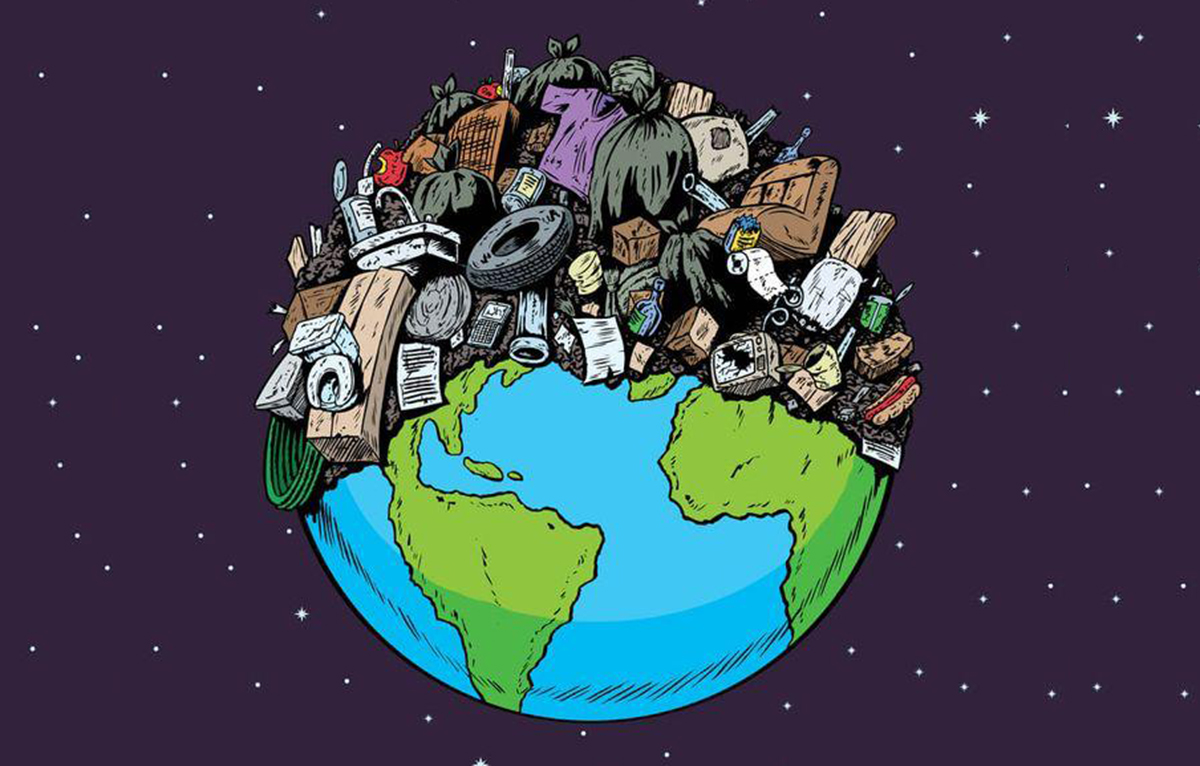 On average, the world produces 2.01 billion tons of waste annually. The World Bank Reports that East Asia and Pacific are the largest producers of waste generating 23 percent (468 million tons) of the annual waste. 468 million tonnes is equivalent to the weight of 46,337 Eiffel Towers (10,100 tons) or 4.5 million blue whales (105 tons). As shown in the graph below these numbers are expected to steadily increase over the next 30 years. The National Environmental Agency of Singapore reports that in 2021 alone Singapore generated 6.91 million tons of solid waste and only recycled about 13 percent. These numbers show that overall as a global economy; we have a lot of work to do. 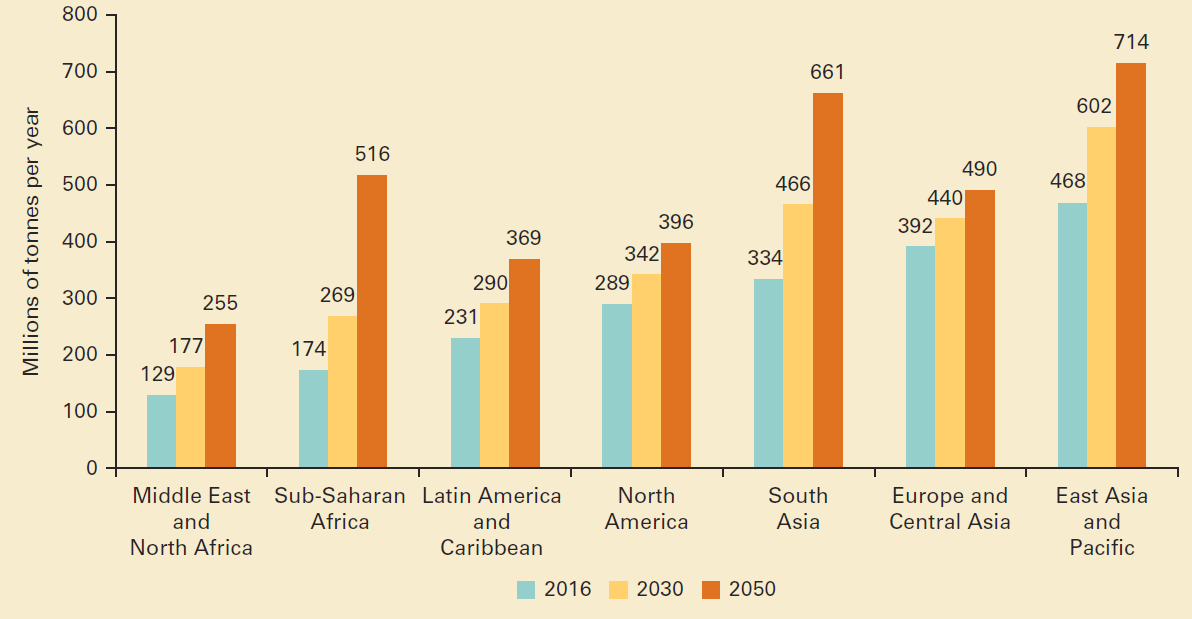 What is Municipal Solid Waste?

Municipal Solid waste (MSW) is a growing concern due to the increased urbanization and industrialization that has occurred across the globe. MSW is generated by domestic households, non-domestic, and industrial entities.

What is the Environmental Impact of Municipal Solid Waste?

Where does all the waste go?

37 percent of all global waste ends up in some type of landfill. Other methods of disposal include composting, incineration; open dumping, other, and recycling. Each form of disposal has different implications of what it is doing to the environment.

Landfill disposal causes loss of land area, contributes to methane emissions into the atmosphere, pollutes underground and surface water sources, and contaminates soil. The World Bank reports that without improvements in the sector, solid waste related emissions will likely increase to 2.6 billion tonnes of CO2-equivalent by 2050.

Another significant source of concern are climate impacts stemming from fugitive methane emissions which escape into the atmosphere from all points of the natural gas supply chain. Methane emissions are 26 times more harmful than CO2 and these emissions are a significant driver of short term warming of global temperatures. Fugitive methane emissions also contribute to landfill fires that happen often during the hotter months of the year. This is due to spontaneous combustion, which occurs when methane gas comes in contact with oxygen causing the fire. Chemicals released from the Landfill fires negatively affect air quality.

The polluting of underground and surface water sources can also occur as result of leachate. Leachate is a foul smelling liquid that drains from landfills following the anaerobic decomposition of organic waste in the landfill. Leachate can then contaminate groundwater and other natural water sources. This is a hazard to surrounding communities because groundwater is often a source of drinking water.

Open dumping increases accidental fire hazard, loss of vegetation, and slope instability. In India there are over 2025 dump sites throughout the country, with most having been created illegally. As urbanization has continued, unregulated dump sites that used to be far away from the city are now directly situated near the city or even within the city itself. This is a cause for concern for the local populations that are exposed to mismanaged municipal waste and minority populations that are more likely to be effected by these unethical techniques of waste management.

Poorly Regulated incineration or open burning releases harmful chemical and pollutants to the air which increases the risk of cancer, birth defects and other health impacts.

On the global stage municipal waste is governed by regional and local authorities. Each local authority determines the best practices for the communities under that governing body. As a result, innovative technologies are not highly accessible to all parts of the world, since the entire industry is segregated. While many innovative technologies continue to be developed, it is not at a rate that can keep pace with the amount of waste being produced. This is where Blue Planet steps in to unite a segregated industry and provide waste technologies throughout all parts of the world rather than just a regional and local level.

In 2020, Blue Planet partnered with Zigma Global, a landfill remediation company offering a solution involving segregation, treatment, recycling of dumped legacy wastes and clearing old landfills. Zigma has created a 3 step process to simplify and accelerate the clean-up of MSW.

Before any of the clearance work can be done Zigma Global analyses all aspects of the acquired landfill site including chemical, soil, and land composition. This is done through 3-D technology measuring the land site and specifications as well as a lab analyses and reports done onsite and offsite at Zigma processing areas.

The first stage involves the entire landfill site being converted into equal sized windrows and turned frequently along with spraying of bio-culture and de-odouriser. This exposes the waste to air and oxygen which helps decompose the organic component of waste without causing additional odour nuisances. This ensures removal of stench, reduction of flies, a reduction in potentially pathogenic microbes, enhanced bio-degradation, and reduction of moisture. Birds and animals that are often found near or on landfills will also leave the area due to the lack of food and waste.

In this second stage, a mobile state of the art system separates the excavated landfill waste into soil, stones and combustibles with almost 100 % accuracy. The combustibles are refined using multiple processes including grinding, drying, precision trammel screening and bailing to meet the relevant requirements to optimise the value of recovered waste.

In the third stage, the non-combustible fraction namely soil and stones are disposed for construction / earth filling and combustible fractions as Refuse Derived Fuel to cement companies. Germination tests are also done to determine if the soil has been adequately treated and can be returned to the earth following EPA guidelines. Toxicity, salinity, and PH are all tested before disposal of waste to adhere to CDC guidelines. The recovered materials which included combustibles, soil, soil enrichers, scrap metals, wood, and tyres are then sold to local recyclers and generate significant value.

At this point in the process the land can be reclaimed and used for best use in that location. Some examples of reclaimed land include children’s park, sanitary landfill, a plastic waste processing centre, and lake reclamation.

In the 7 years that Zigma Global has been operating, large and small scale projects have been completed and with each year are growing larger with the capacity. Below are two of the largest and most recent projects completed by Zigma which show the transformation that can be accomplished with some of the newest technology. Cameras are placed throughout facilities, processing sites, and projects to provide better transparency throughout the company and their targeted customers.

Zigma’s Technology is helping clean up some parts of the world on a huge scale and removing large amounts of methane from the atmosphere essentially slowly helping reverse many of the climate change issue. This new technology enables the increased conservation of natural resources by extracting significantly higher levels of materials without risk to humans and the planet. For corporations or governments who are keen to see how Blue Planet can help offer a landfill mining solution, please contact us.